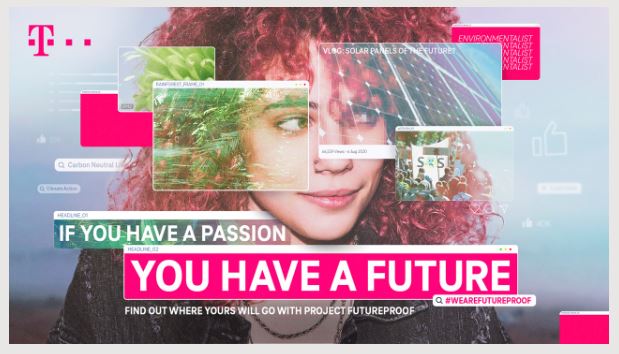 As a continuation of the effort and promise made in its 2020 brand campaign, ‘We’re here for this generation and what they do next’, Deutsche Telekom continues to explore topics and issues that are most relevant for the younger generation.

The lingering of the pandemic managed to dampen GenZ’s relentless optimism with one issue in particular: career uncertainty. Research showed that 61% of European Gen Z are anxious about career prospects, while 54% are unsure what careers will exist in the future, and 43% question if they have the qualities they need to succeed. Telekom saw it as its responsibility to help them navigate the opportunities and overcome the challenges they face.

The aim of the campaign was to provide GenZ with tangible values in the form of tech solutions and utilities, reassuring them that if they have a passion, they will be #futureproof both in their careers and in general, no matter what twists and turns the future holds. From the company’s perspective, it wanted to strengthen its relationship with GenZ and inspire their loyalty, and also position the brand as a preferred provider of choice.

To do this, it created Project Futureproof, a tangible tech-based utility designed to offer support and guidance, from GenZ for GenZ. Developed in collaboration with both Gen Z contributors and a diverse group of professional skills and employability experts. It aims to connect users to peer-to-peer inspiration and support.

It was underpinned by a focus on the career opportunities that will naturally evolve from this generation’s current passions. At the heart of the project is a free-to-access web app/online hub that serves to inspire and support the younger generation in a personalized way. The online hub features helpful resources where Deutsche Telekom experts share insights on how to write CVs, prepare for job interviews and improve your social media profile.

Launched in two campaign phases, Project Futureproof was featured across a range of Gen-Z-focused channels, including Instagram, YouTube, Snapchat and TikTok. The two phases were strategically sequenced to create a consistent story flow using a broad range of ad formats and platforms.

Phase 1 was about generating maximum reach and awareness by directing the target audience to an optimistic short film that invited young people to choose utopia over dystopia, and to further envision an ideal future, where their passions are brought to fruition.

The campaign kicked off with a one-week impression focus across Europe, followed by six weeks of video delivery optimized on target group penetration within GenZ. Billie Eilish amplified the launch further on social media, together with a host of GenZ influencers.

The second phase of the campaign built on the momentum of Phase 1, but shifted the goal towards giving further context, while encouraging engagement with the web app. In order to do so, the campaign activations on social and programmatic were optimized towards link clicks and driving qualified traffic to the app. Telekom also launched a Snap lens and partnered with TikTok creators to promote the web app and online Hub by showing how different passions can translate into career opportunities.

Beyond the tool and campaign, Telekom also created real world spaces and opportunities such as an internship program, online classes, one-on-one career advice with recruiters and talent managers that further engaged the audience.

As a branding campaign, #wearefutureproof performed exceptionally well in relation to Telekom’s media objectives. Brand fit shift saw an impressive increase up to 34% across markets (150%+ against target). Meanwhile, Kantar results also showed that the campaign had delivered in terms of ad awareness, brand favourability, and brand consideration.

The web app/online hub proved attracted 1.6m, with more than 200,000 profiles created and average time spent on the site of more than five minutes. Overall, the campaign generated over 924m impressions and inspired more than 265 pieces of editorial coverage. At the time of entry, the ‘Project Futureproof’ film had been viewed over more than 99m times, with a 100% viewthrough rate of 21.6%.

Judges’ View:
“An impressive campaign! From the need-opportunity, messaging, influencer selection, and overall vibe, to the connection with the brand and understanding of the audience – it’s all there! Very well done.”