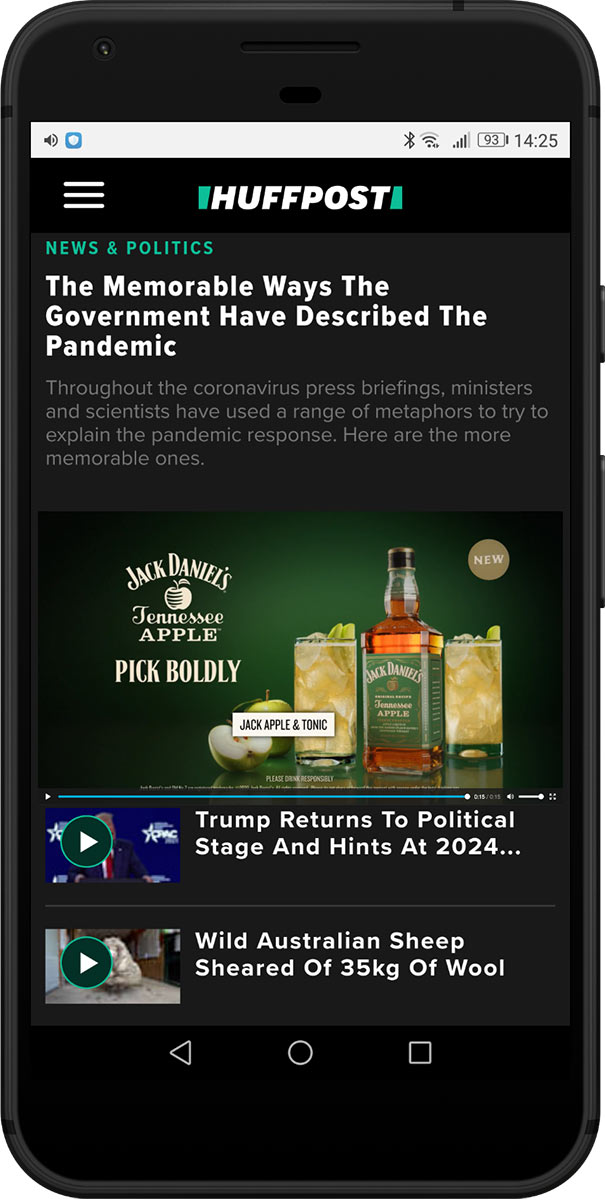 In 2020, Jack Daniel’s parent company Brown Forman was tasked with promoting two brands, the long-established Jack Daniel’s Tennessee Whiskey (JDTW), and recently-launched Jack Daniel’s Tennessee Apple (JDTA), at a time when bars and pubs were closed. The marketing objective was to drive awareness of both brands, and footfall into the off-trade, and by doing so, gain market share from competitors – drinkers of flavoured spirits, long serve whiskies, rum and other non-flavoured spirits.

The audience, for these brands, defined as ‘Independent Spirits’, is naturally tech-savvy and mobile-first, even more so during the pandemic. So Hawk Platform worked with Jack Daniels’s media agency, Spark Foundry, to execute an advertising campaign that adopted smart audience targeting to encourage people to go to store and buy the products.

Brown Forman specified the supermarkets stocking the products that were to be part of the campaign; Hawk Platform ringfenced these so that mobile devices coming within a range of 10 kilometres were targeted with audio and display ads for JDTW, display for JDTA. Hawk Platform also set a control group to compare the actions of people who had seen or heard an ad with those that hadn’t. It also worked with IRI to measure the sales uplift at supermarkets that had been ringfenced, compared to those that hadn’t in order to demonstrate the effect of the ad campaign on consumer purchasing behaviour.

Hawk Platform built two distinct audience groups: JDTA focused on a trend-setting Gen-Z audience of males and females that enjoy eating out, travelling and socialising and are perceived to be influential among their peers, whilst JDTW included a slightly older demographic, adding Millennials as well as Gen Z, with a male skew and interests such as gaming, sports and cars.

To reach consumers throughout the purchase funnel, Hawk Platform recommended a multi-touchpoint approach. Pre-roll and story formats were tested, and to capitalise on an already-engaged audience, programmatic audio ads – a first for Brown Forman in the UK – were then deployed as consumers moved into the (purchase) consideration phase. Finally, display formats with Google maps integrated pushed consumers even further through the funnel towards purchase in supermarkets. All display formats were bespoke for Jack Daniel’s, incorporating static and video creative, along with store-finder features.

The JDTW audio ads came in 30-second and 15-second versions, while Hawk Platform’s in-house studio built four mobile display ads for each brand, incorporating static imagery and video content, as well as store-finder features to make it easy for potential buyers to locate the nearest retailer.

The campaign reached 1.5m more Independent Spirits than planned and they were 13 per cent more likely to engage. More importantly, it coaxed them from their sofas and into store, with a cost-per-store visit that was 95 per cent more cost-efficient than expected. Sales tracked and attributable to this campaign delivered an astonishing £570,000 additional revenue for Jack Daniel’s, an ROI of £7.09 – 3.5X higher than planned.

Judges’ View: “Strong methodology to measure campaign impact, including the impact on sales. Strong ROI for the campaign given the media investment. Innovative formats, strong creative, and a great set of results.”

Russian Standard Vodka, The Village Communications and Hawk – Raise Your Standards in Vodka