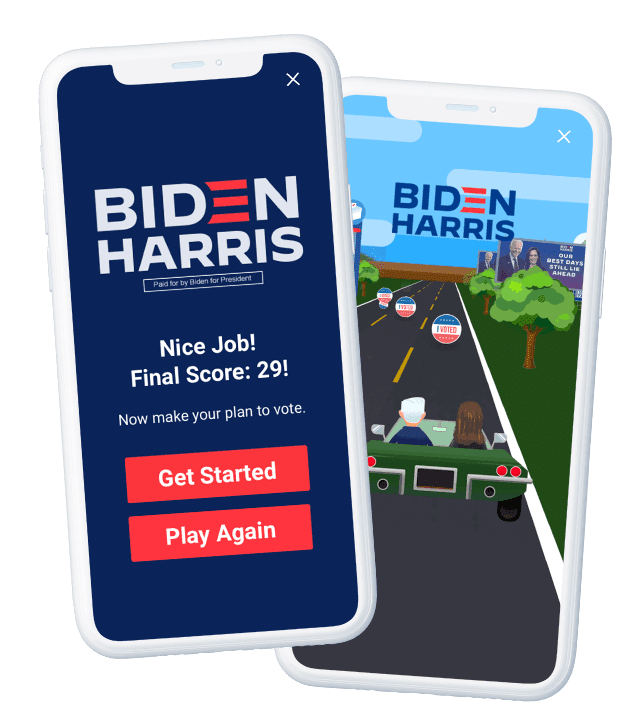 Joe Biden’s 2020 election campaign took place in the middle of a pandemic, where freedom of movement was much curtailed, so using digital channels was something of a no-brainer. However, his campaign team wanted to look beyond mainstream digital channels to reach voters at home, tapping into the many hours spent in front of smartphones and computer screens during the pandemic. Its key audience was women ages 30 to 55, who market research suggested spent a significant amount of time playing mobile games. The campaign’s collaborating agency, Bully Pulpit Interactive, decided that playable ads represented the best opportunity to break into this vertical. The interactive elements of this ad unit would help Biden’s messaging stand apart from more traditional political advertisements while tapping into the positive sentiments associated with gaming.

Tapjoy’s Interplay Studio brainstormed several playable ad concepts for the Biden campaign. Bully Pit Interactive chose the “Ridin’ With Biden” concept – an Interactive End Card where users drive Biden’s beloved Corvette past obstacles to reach the White House. The ad opened with a gamified 8-bit video that introduced the concept in a fun and engaging style. The campaign team was particularly pleased with how the ad emphasized “Bidenisms” – various Biden sayings and campaign messages such as: “The race is on for the soul of our nation.”

On the brand safety front, Tapjoy prepared a custom brand-safe app allow list, and verified that app publishers on this list were willing to accept political ads before the campaign deployed. Ridin’ With Biden launched in mid-October and targeted users across a set list of swing states like Arizona, Colorado, and Georgia. In total, the Bully Pulpit Interactive team managed over 75 vendors across 13 channels over eight weeks with the same end goal of driving traffic to IWillVote.com. The Tapjoy campaign contributed to a significant volume of site traffic at a surprisingly low cost of $0.66 CPC, 5X lower than the campaign’s $3.20 CPC average for other channels.

The campaign drove more than 12m completed views and 4m ad engagements, along with a 35 per cent engagement rate and a 9 per cent clickthrough rate. The ad creative itself generated a 90 per cent video completion rate and 65 per cent game completion rate – 3x above Tapjoy’s internal benchmarks. A successful campaign, and also a brave one, putting faith in mobile gaming’s ability to reach the desired demographic. This entry also took the award for the Most Effective Advertising Campaign.

Judges’ View: “Gaming companies have been trying to persuade brands to advertise in their games for years, but it’s a very bold and brave move for a presidential candidate to put his faith in the idea of a game as an ad.”